Agent Activation is one of the most important functions that agents can perform in relation to themselves and to the others. On the very basic level “activation” is a fusion of energies (see the vocabulary) and in order for this fusion to occur, a connection has to be established at first.

To be very practical, a real social situation is full of doubts, second thoughts and preconceived notions that make it more difficult to connect. There is a reason for that, but whatever that reason is, it does not mean that it works for everybody.

An agent sees any situation as a dynamic network. A social situation at a public space is a set of disjointed network subgroups and lonely nodes. The agent’s job is to connect to those groups in order to learn more about them and then engage them into a meaningful trans~mission, activating the other agents.

In order to perform this job well, an agent needs

1) to activate a set of beliefs, which will produce a conducive mindstate to implement this approach into real life.

2) to have a set of behavioral patterns and narratives available within that mindstate, which can be further evolved and augmented through iterative adaptive feedback.

A set of beliefs is a set of axioms – the simplest building blocks of truth, which can then be further expanded to create more complex patterns, to build narratives and strategies based on them.

At every moment of time an agent only needs those beliefs that make sense for every particular situation and for the network in general. An agent’s task is to have connections in order to be engaged, but not too many in order to not get overloaded. On the scale of network that means constantly making new connections and deleting the old ones, in order re-connect them again in the future.

At the same time, an agent should have consciousness of the whole, the entity that s/he belongs to. So the structure of the resulting network is also of high concern. The ethical guidance here is to contribute to network connectivity in such a way that it can sustain itself and evolve. It is well-known from network science research that the most stable formations in this regard are Small-World networks. Agents in such networks are connected in tightly-knit distinct subgroups, which interact on the global level through trans-network links mainly between hubs that link different subgroups together. Both human brain and human society are organized in this way. This allows for the whole to have different parts and to be aware of some of them simultaneously at every moment of time. That is why it is possible to be reading this text and to hear what’s happening in the room and to breathe at the same time. That is also why everyone knows very different groups of people: coworkers, komarades, friends, family and dancers.

Therefore, the only ethics that an agent follows is the ethics of establishing connections, breaking them, building islands of non-equilibrium stability along the way, creating new subgroups, leaving the old ones, coming back to them again, connecting to hubs, becoming periphery. Such behavior is based on the principle of polysingularity and follows the idea of inclusive exclusivity. 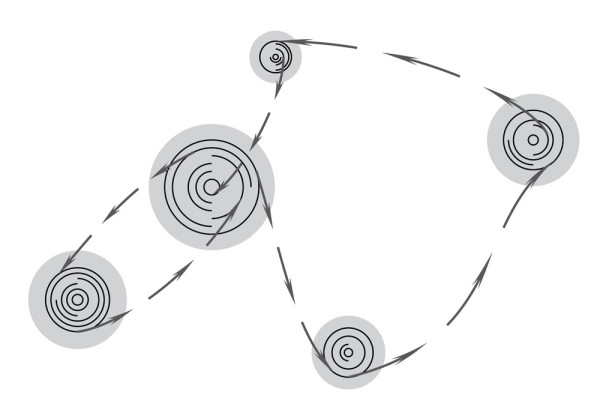 The ethics of inclusive exclusivity allows the agent to have the right belief set to enable active build-up reconfiguration of connections within a network. In order to translate this ethics into concrete actions some formulas can be activated in order to make things work. In order to realize what those actions should be, we use 8os practice focused on concrete and simple formulas for adaptive relation to one’s environment. 8os is a suitable candidate to support network-based ethics outlined above, as it is based on a similar understanding of connectivity.

The basic premise of 8os is that any incoming impulse should not be allowed to create tension or to fully transform the medium that it’s going through. Tension leads to standstill, full transformation breaks up the existing structure. The goal is sustainability, which also implies maintenance of structural form. At the same time, this form should be able to move and reconfigure itself in order to be adaptable to external influences. The main idea in 8os is to deal with this situation through the A->R->D method: Assimilate -> Redirect -> Dissipate. Practical applications of this principle will be exemplified in concrete formulas below:

(1) “no, but” -> “yes, and” (creating momentum)
The first formula corresponds to 8OS idea that we should never contradict tension or follow the direction that it proposes. Rather, an incoming impulse is assimilated into the existing structure and redirected through it for further communication or dissipation. In practical terms this means that it should always be along the way, at first. Then the way can be changed after which those who are walking along can part from each other or stay together. “No, but I think that it’s not true, because…” becomes “Yes, you may be right, and I also think that…”

(2) 2 -> 8 (catching the wave)
An agent never deals with a situation of 2. Binary codes, yes/no, male/female, myself/another, black/white are all left on the backup drive. A situation is always an 8. It’s a reciprocal exchange of energy, data, and whatever else forms the flowstream of encounter. In an 8 it’s always together and not apart. 8 is also 2 multiplied by itself two times, so it’s the beginning of a fractal. An agent does not really activate another agent. The activation happens between them, together with them. The judgement never falls on one agent, but on the dynamics itself.

(3) 90° -> 69° (oblique strategies)
An agent never approaches straighforward at ninety degrees. The approach is always oblique, from the side, in order to have/give space for the 8 to occur and to redirect at encounter.

(4) x -> xy -> z -> zt -> zy -> xyzt (3D search)
An agent can dwell deeply, but in order to fully submerge into one meaning one has to be fully aware of the others. This formula points to the dynamic process of touching upon the surfaces in order to get a better understanding of things before going into specifics.

(5) 1 + 1 = 8 (non-attachment)
This formula exemplifies the concept of non-attachment. If life is a movie then there are many different ways for how it can evolve and even many more ways to look at things. Clinging to an agent, a judgement or situation is fruitless unless ones wants to create a replica or to reenact the form/shape pattern again. If one wants to move, one has to constantly switch attention and direction of that movement.

(6) O (mission)
An agent always has a mission that will motivate them to perform activation. A higher purpose towards the divine. This is the source of all movement. Smaller milestones may be established as long as they follow towards the main outcome.

(7) 1 + 2 – 1 + 3 – 2 + 4 – 1 + 3 – 3 + 5 – 2 … (oscillatory advance)
An agent always proceeds through a combination of addition and substraction at least at first, before multiplication stage is activated. Such movement creates oscillatory wave-like dynamics, which is still directed towards a positive outcome (speaking both literally and metaphorically). A good techno track is made in the same way: first a hint of something, then that something is removed, and then it comes back with renewed fervour. This is the basic formula for building desire, which is closely related to the notion of lack.